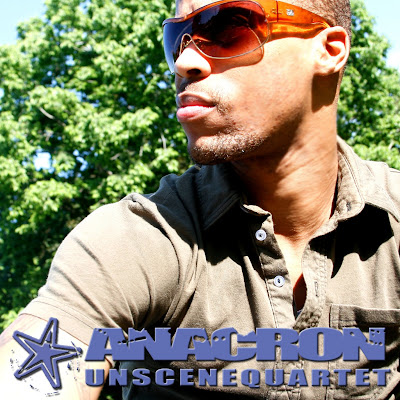 CLICK HERE TO DOWNLOAD EP
Another viable release from the Peanut Gallery Network's west coast division has leaked onto the internet; a free six-track EP previewing and featuring music from both highly anticipated Anacron albums for 2009, "Unscene Unherd", and "The Gallery Quartet".
The EP's first three club-ready dance tracks showcase not only Anacron's adept lyrical and conceptual prowess, but also his talent as a rapper, singer, and producer. "Get Stoked!", an adventurous collaboration with Denmark's hip hop producer elite, KV (Kon-Vee), is a brightly shining journey through Anacron's idea of what brings energy to a party. "Robot Jam", no matter how elusive the title may be, is a self-produced, electro-pop influenced love song by Anacron, that any sound-seeking hipster would readily cling to for a momentary validation of cool. The third track is "The Out Crowd", a seemingly derogatory jab at that same hipster club culture, in which Anacron denounces the following of trends and hype in place of musical and entertainment quality. All in all, the three songs from the Unscene Unherd album represent an almost futuristic interpretation of what used to be "underground" culture.
The songs that follow are nothing less than pure genius, and an undeniable example of what makes Anacron an artist's artist; three musical morsels written, composed, arranged, and helmed by Anacron, featuring musicianship from his Chicago-based jazz ensemble, The Gallery Quartet. "Friends" is an upbeat, latin-infused jazz tune of sorts that features Anacron's impressive vocals (and alto saxaphone chops) shifting octaves on the topic of miscommunicated affections. "Jaccin Broadz" is a devilishly smooth hip hop groove with Anacron serving up a hilarious tale about stealing some poor sap's girl, all the while crooning like a jazz singer on the choruses. Finally, "It Takes Two" is a thoughtful ballad that touches on a subject similar to the first of the trio, with a far more somber and retrospective analysis of the situation.
All in all this is a stellar EP, that could honestly serve as an official album release in and of itself. The fact that Anacron can demonstrate and display so much skill and talent in an industry where artists are simplifying and dumbing down their output daily, is not nearly as impressive as the fact that he's willing to just give this stuff away for free. Any hip hop fan, nightclub attendee, disc jockey, or overall music lover would feel more than thankful upon hearing this assemblage of fine audible art!
If you missed the download link posted above, click HERE to get it.