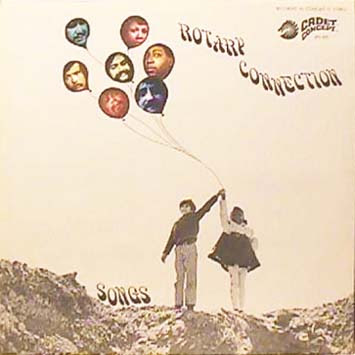 If I suggested that this is the best gift you could give someone, I’d probably be alone on this thought; but, it is truly something I have personally appreciated, as much as it is somewhat classic or perhaps not considered rare today. I won’t bother to rewrite the history. You can easily wikipedia ROTARY CONNECTION. You could even ask your local music store and they might know what you’re talking about. They might also look at you all crazy but that’s okay. What I blog is subjective to what gives me a natural high. You might think this music sucks, but at least you know a little more about what music you don’t like or do like. I’ve been thinking a lot about Respect between friends and relationships. If you ain’t got respect for each other, you ain’t feelin’ the realness and you might want to boss up or down a little.

This style of music used to be too weird for most listeners who generally accepted blues, rock or pop more than psychedelic soul. But what a beautiful genre to venture into! Music starts to sound the same if changes aren’t made, right? It’s the nature of music evolution. I personally love the LPs and 45s of Rotary Connection even though there are other sounds that have become more desirable to me. If you haven’t already, get it on your ipods or download it. It is awesome. And next time you listen to your most favorite tune in the world, think about all the sounds in the universe that contributed to these magical creations. I even like their psych-soul Christmas songs but my all time favorite 45 is off the 1969 Songs Album: Respect. Another thing I’d like to point out is the covers of all these albums are quite nice art pieces, too. My ears celebrate this timeless music of Chicago Soul and hopes yours will, too. If I dropped Minnie Ripperton’s name, lots of heads would agree that most voices you hear on the radio don’t have that genuine quality of sound as they did back then. She was and is absolutely not auto-tune material. Back then, this music was not radio-friendly but now there are some tasteful radio stations that will dedicate time for psychedelic soul. So go out and enjoy the sun, the rain, the face slapping wind of Chicago City and blast some Rotary Connection on the internets wherever you are...