PPP, formerly known as Platinum Pied Pipers, insist they are nothing like their former selves. They are half right. For those of you who know Platinum Pied Pipers as wunderkind producers, remixers and songwriters, you’ll find that foundation seeping throughout their new album Abundance. I like this new album. It’s like gumbo without dead animals in it. The idea for Abundance, was to combine all that they know about Detroit music and cram it all into one little neat package for your ears to munch on. (Side note: They don’t touch on any of the great rock music that came from "The D." - That would be something to hear.)

Now, that half right thing I mentioned before. It takes a few listens before you actually hear anything that resembles Platinum Pied Pipers of old, and that’s because of the gleaming sheen of 'abundance' sprayed all over this album like cologne. Just like cologne losing the good fight to some very bad B.O., sheen tends to make superstars out of artists by wiping away what made them good in the first place (for example, Black-eyed Peas, who went from innovators to jigaboos in what seems like no time flat); however, it’s surprising to see it work so well on this album. PP manages to use that very same sheen as part of the whole, merely an additional tool in a sea of instruments. Also, they are a band now, (hence the change to PPP?) and have added two vocalists of extreme talent.

The songs are the shit. An amalgamation of the last six decades of Detroit music and sheen (can’t forget the sheen), that actually prefers to ignore the R. Kelly school of R&B, which tends to confuse love and depth for graphic sex and vaudeville. Abundance opens with the stomper, Angel; a declaration of sorts, or more like an introduction of what’s to come. Pigeon Hole is that classic caged bird flapping that will make you soar like you don’t believe in the ground. I don’t care how much you don’t like Jesus (I don’t), Smoking Mirrors will have you catching the holy ghost in a Mosque with its buttery orgy of gospel and electronics. Now that’s good music. 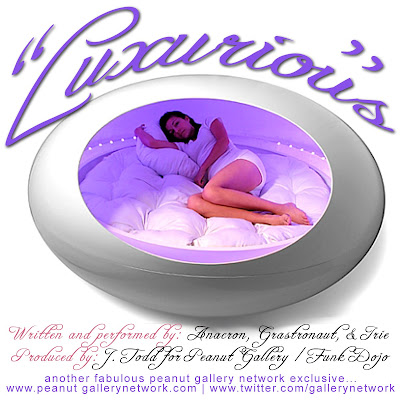 This exclusive Peanut Gallery track from the unreleased "Reunion" album just hit the internet TODAY!
"Luxurious" features two mind-boggling verses on plush living by PG members Grastronaut (aka Southside Slymm) and Irie, a sonically lush beat produced by J.Todd of Def Harmonic, and a ridiculously catchy hook from the PG O.G. Anacron.
This one is simply beautiful, kids... DOWNLOAD, bump, and enjoy! 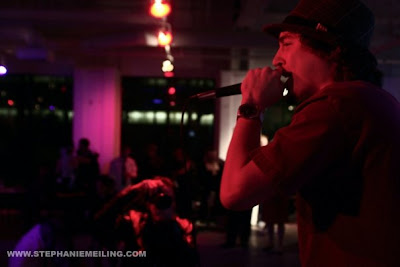 Still dont know about Hollywood-based Peanut Gallery and Living Legends affiliate Kruse? Yes, you are sleeping...
Check out the new music video for his single, "Feeling The Effects"; then, listen to more Kruse on MYSPACE. This producer/emcee has been musically respected on the West Coast and overseas for some time now, ever since he first made noise with his compilation album, "The Kruse Collection". With multiple solo releases under his belt, and forthcoming projects in the works, it's time for you to wake up and get to know Kruse before the rest of the world does. It’s So Nice And Hot In The Chi

Ruby Andrews was born Ruby Stackhouse in the Delta town of Hollandale, Mississippi, on March 12, 1947. She went to Chicago about 1953 and attended Hyde Park High. (page 181. Chicago SOUL by Robert Pruter)

Ruby Andrews is the voice of female (so necessary) Chicago Soul. From the lesser known Kellmac label which converted to Ruby Stackhouse. She later was signed on the better known Chicago Label, Zodiac Records. This lady has what I like to call super lungs.

Nothing happened for Ruby Andrews for awhile and she kept herself in show business as a dancer at a nightclub. It was a dancer that she was discovered again. Disc jockey Lucky Cordell introduced her to local record entrepreneur Ric Williams, who was starting up Zodiac Records. Andrews’s third release for the label was “Casanova (Your Playing Days Are Over),”which made her a nationally famous recording star. In early 1968, Andrews launched her most artistically and commercially successful period with “You Can Run (But You Can’t Hide).”

The song introduced a new Ruby Andrews. Whereas, “Casanova” was a melodic delight, “You Can Run” featured hot, forceful, arrangements that created an ideal support for Andrew’s biting and shouting-style vocals. This was R&B music at its most rocking and rolling; it had loads of energy and excitement while still retaining enough control and professionalism so that the swing and listenability remains. “You Can Run” was written by the Brothers of Soul vocal group (Richard Knight, Fred Bridges, and Robert Eaton). In April 1968, incidentally, the Brothers of Soul got on the national charts with an excellent single of their own, “I Guess that Don’t Make Me a Loser”.

Ruby Andrews sings a version of this song, too.

The Bridges-Knight-Eaton team in the years that followed kept Andrews on the charts and contributed immensely to her success, notably with “The Love I Need” (1968), “You made a believer (Out of Me)” (1969), “Everybody Saw You” (1970), and “You Ole Boo Boo You” (1971). Most her records were recorded in Detroit and Memphis. She recorded for ABC in the late 1970s but never returned to the charts after her Zodiac years.

I personally do not recommend anything on ABC plus the pressings on ABC records tends to be of poor recording quality in my experience. This is of course based on my subjective opinion.. On Zodiac however, I highly recommend anything Ruby Andrews, Mike Terry (productions), or the Bridges-Knight-Eaton days. One of my mum’s favorites is Ruby Andrews’ take on Hound Dog, which we all know is sung by the famous Elvis Presley. Ruby makes the song sound like Tina Turner’s spirit took over Mr. Presley in this take. It is also on Zodiac Records.